“Grow-A-Showa – The tale of an Omosako Grow Out Competition for Northwest Koi Club Hobbyists Who Want To Get Their Feet Wet With Quality Nishikigoi Supplied By Pan Intercorp And Simultaneously Learn About Tategoi Development Over The Next Year.”

On a warm May afternoon at Pan Intercorp, members of the Washington Koi & Watergarden Society and other northwest koi clubs gathered around 35 bags, each containing a yearling koi and possibly the dream of becoming a champion. This was the kickoff of what will become a yearly Nishikigoi grow out competition, during which members of northwest koi clubs will have the opportunity to take home a Tategoi, a koi that hasn’t yet reached it’s full potential. The next year will be spent growing and watching development of the koi, after which they will be brought back for the 2014 Nozomi Young Koi Show to compete for awards like “Best Growth”, “Biggest Change” and “Best Overall”. 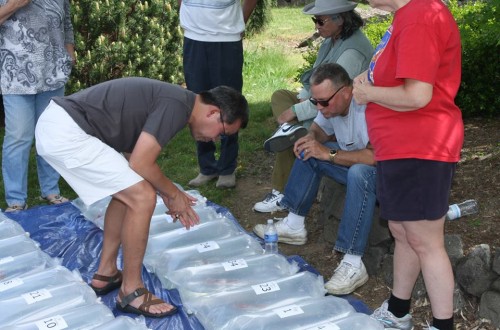 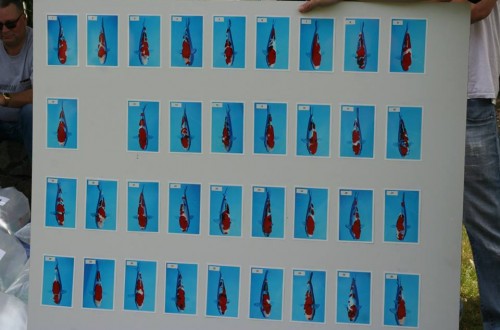 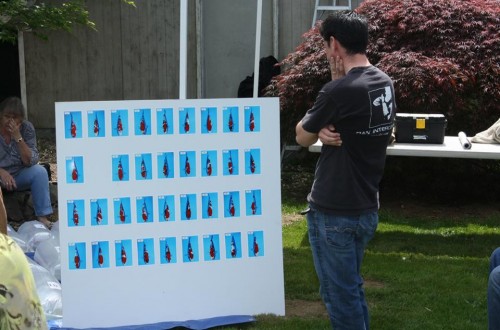 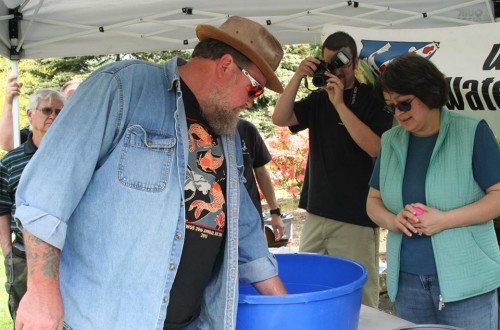 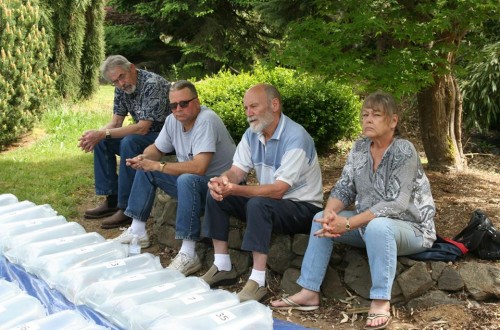 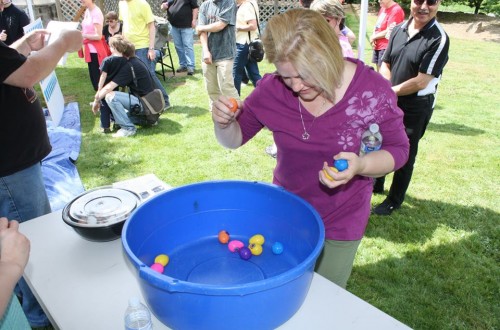 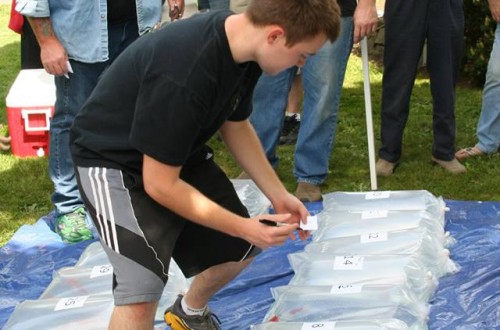 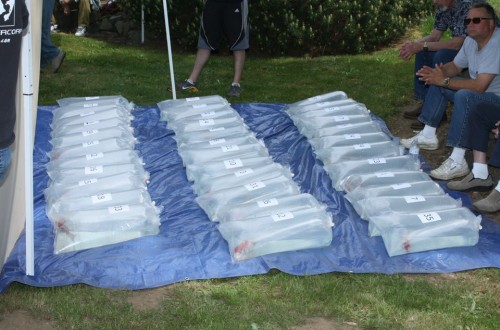 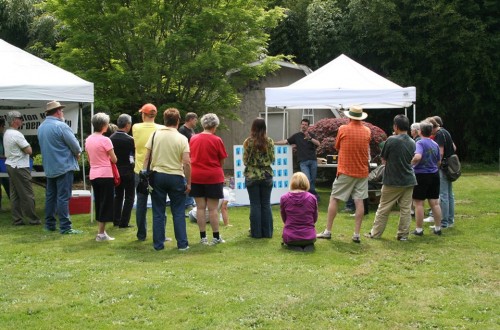 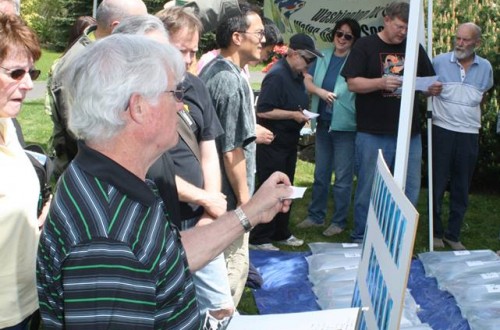 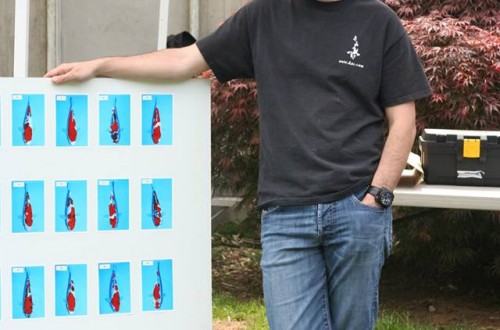 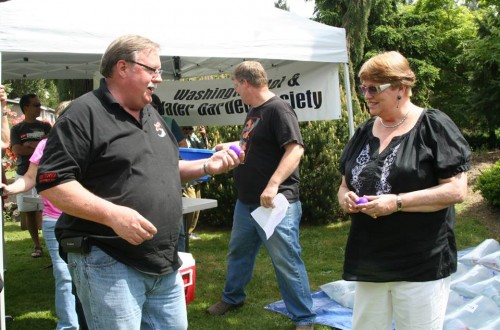 For the first year of this grow out, participants drew numbers out of a hat to select their very own Omosako Showa Sanshoku. Pan Intercorp chose to import a select number of yearling Omosako Showa for the grow out because of the great potential seen during this winter’s buying trip to Japan.

Pan Intercorp has a great relationship with the Omosako family; Takahiro Omosako was an apprentice at Pan Intercorp for three years while he was in the United States learning english and the needs of the American koi market. Normally, people associate the name Omosako with world-class black and white Shiro Utsuri; in fact, Omosako is often credited as being the most accomplished breeder of the variety in all of Japan. In recent years however, the Omosako family has taken their incredible knowledge of Shiro Utsuri and applied it to the breeding of Showa Sanshoku. The female Oyagoi (parent koi) of the grow out Showa is named Takahiro Showa. The result of breeding Takahiro Showa has been Showa offspring with unique red Beni patterns and ink-black Sumi that often takes many years to develop. These characteristics make Omosako Showa the perfect grow out koi. participants will need to harness their knowledge of koi keeping, and their patience, to help the yearling koi reach full potential.

A common misconception that will be challenged by this grow out competition is that young Showa Sanshoku always need to have a desirable red Kohaku pattern along with their Sumi pattern. Many of the Tosai Omosako Showa have unconventional Kohaku patterns at this stage of their development, sometimes lacking a Beni step near the tail or with a large span of white between steps. This makes some people shy away from selecting young Showa, because without a great Kohaku pattern and only the beginning of their Sumi pattern, they aren’t as eye-catching as other varieties. Not yet, that is.

The secret to selecting great Showa is to realize that they are the most forgiving of the Gosanke varieties (Kohaku, Sanke and Showa). While Kohaku and Sanke have a white base coloration, Showa have a black base. This allows Sumi to rise up nearly anywhere on the young Tategoi, sometimes showing up without a previous hint. Many champion Showa, including the 2012 All Japan Show Grand Champion, have had bands of bold Sumi rise up from deep within the skin, creating dynamic patterns that fill in areas that were lacking. Large patches of Sumi tend to hide imperfections along the edge of a Beni pattern, sometimes covering up an area of weak Kiwa or Sashi (the rear and leading edge of the pattern, respectively) and other times just creating a bold and powerful pattern that draws the eye in.

Most of the Showa started the competition at 8 to 10 inches long, and just under a year old. Many of the participants are hoping for koi that are pushing 16 to 18 inches by the time they are two years old. While it will take a summer full of sunny days and plenty of food here in Washington, both koi club members and the staff at Pan Intercorp are optimistic. Some of the koi keepers involved have large koi ponds, with over 10,000 gallons of recirculating, filtered water. While growth is sure to be great in a system like this, other hobbyists have equal luck growing koi in heated ponds between 2000 and 3000 gallons. What is lost in total water volume can be made up by more thorough filtration, heating through winter and lower stocking levels. In fact, some Washington koi keepers are able to grow their yearling koi at comparable growth rates to Japanese koi farms using these smaller, heated systems. The feeding of top quality koi food with a high protein content will surely be a deciding factor in which koi will achieve the greatest growth, while water quality will definitely play a key role in color development. Concrete ponds, or those fed by a water source with higher general hardness and carbonate hardness will surely enjoy the benefit of bolder black coloration and likely a faster rise of Sumi. It will be up to each individual hobbyist to maintain the best possible water for the next year to improve their chances of raising a champion.

With the hobby of koi keeping becoming ever more evolved and faster paced, a grow out allows us to take a breather and find out what we enjoy most about koi. Is it doubling the size of a koi in a year? Watching ink-black Sumi rise from the depthsof red Beni and white Shiroji? or is it getting your feet wet in the world of koi competition? In the end it can be all of this and more; Grow outs are what koi keeping is all about: growing koi, improving abilities, and rain or shine, having a blast participating in a one-of-a-kind competition, with one-of-a-kind Nishikigoi.